Burger King is once again offering the Steakhouse King at participating locations for a limited time.

The Steakhouse King, which clocks in at 923.5 calories, features one of Burger King’s signature flame-grilled beef patties paired with delicious ingredients such as American cheese, thick-cut smoked bacon, gourmet crispy onions, and steakhouse sauce, served on a sesame seed bun.

There’s also a double version available that comes with all the same ingredients, but adds an extra patty and an extra slice of cheese. The Double Steakhouse King has 1161.7 calories of which 710.4 are from fat. 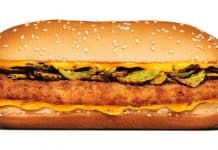