Originally introduced in 1983, Wendy’s Plain Baked Potato weighs between 10 and 12 ounces and contains approximately 270 calories and 61 grams of carbs.

Made with Russet potatoes, which is the classic baking potato, then wrapped in foil and baked in the oven for 60 minutes at 375 degrees, Wendy’s Baked Potato consists of just one ingredient: Potato.

How Many Calories in Wendy’s Baked Potato

As mentioned above, there are 270 calories in a Baked Potato from Wendy’s. Most of the calories, over 90 percent, come from carbs. The remaining calories come from protein, which provides about 10 percent.

You can see the full nutritional breakdown of a Baked Potato from Wendy’s in the table below:

While Wendy’s Baked Potato does not directly contain allergens, cross contact is possible due to common handling and preparation areas in the chain’s restaurants. Therefore, Wendy’s is unable to guarantee that any menu item can be completely free of allergens. 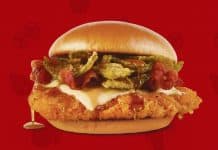