Taco Bell has a new menu item called the Loaded Nacho Taco. It’s delicious and cheap, but the big question in everyone’s mind is: Will it make you fat? Let’s explore its nutritional content to find out.

The Mexican chain’s new $1 Loaded Nacho Taco comes with seasoned beef, cheese, lettuce, nacho cheese sauce and seasoned red chips in a flour tortilla. Each Loaded Nacho Taco has 280 calories, of which 130 are from fat, and 116 are from carbohydrates.

As you can see, the ingredients on this item are basic and it doesn’t contain as many calories as you’d think. However, it does pack plenty of carbs and fat, while the protein content is relatively low.

The chain’s latest menu item is also available in a spicy version called Spicy Loaded Nacho Taco, which features all the same ingredients, but with jalapeño peppers. The jalapeño peppers just add 10 calories, so as far as nutrition values go they’re the same.

As mentioned above, a regular Loaded Nacho Taco has 280 calories. Forty-five percent of the calories are from fat, 41 percent are from carbs, and the remaining 14 percent—40 calories—are from protein.

Check out the table below to see more nutritional details:

What About The Spicy Loaded Nacho Taco?

Ingredients and Allergen Information via: TacoBell.com. 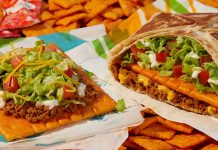