Jalapeño Bites come in 5-piece and 8-piece servings which contain 350 and 530 calories, respectively. They also include a side of Bronco Berry Sauce which adds 90 calories and 22 grams of carbs.

Although delicious on their own, the jalapeno poppers really pair well with the chain’s Bronco Berry Sauce or their Ranch dressing. However, the buttermilk ranch dressing adds another 210 calories and 22 grams of fat.

So just do yourself a favor and eat them without the dressing or the Bronco Berry Sauce.

If you wanted to burn the calories in a 5 piece serving of Jalapeno Bites, it would take about an hour of low-impact aerobics, according to the MayoClinic.org.

A 5-piece order of Jalapeño Bites has 350 calories. Of those calories, 43 percent come from fat, 52 from carbs, and 5 percent from protein.

The table below provides more detailed information about the item’s nutritional content.

The Jalapeno poppers at Arby’s contain the following allergens: 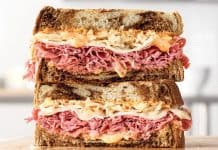