Chick-fil-A’s chicken sandwich is the stuff of legends. In fact, the sandwich gave birth to the Georgia-based chicken chain, and media outlets like The Huffington Post have named it the best chicken sandwich in America several times.

The Chick-fil-A chicken sandwich is low in calories and tastes amazing. That is why it is still the number one selling entrée at the nation’s largest chicken restaurant chain.

Imitators are everywhere, but no one has produced a chicken sandwich as good as this one, and probably no one ever will.

The original secret recipe, which hasn’t changed since the 1960s, is still a secret. In fact, it’s such a big secret that the original recipe is held in a vault at Chick-fil-A’s headquarters in College Park, GA.

How Many Calories in Chick-fil-A Chicken Sandwich?

The chain’s classic chicken sandwich is available in just one size. So determining its nutritional content is an easy task.

The sandwich is also available in Gluten-free or multigrain bun. And you can make it a packaged meal too. However, swapping the regular bun for a multigrain bun will add 180 more calories to your sandwich.

Also, Chick-fil-A’s Gluten-free bun is the only certified Gluten-free option on the menu.

But Chick-fil-A management says they do not consider the kitchens of their restaurants as being “gluten-free for people with Celiac or a greater sensitivity”.

With that said, you can see the full nutritional breakdown of America’s favorite chicken sandwich below:

These extra items will add more calories to your meal. So try to order just the chicken sandwich if you’re trying to keep your weight in check.

Below are the nutrition facts for both options.

Get it without the bun and it’s totally healthier than the original version.

The classic chicken sandwich recipe contains 440 calories, whereas the no bun version only has 230 calories.

Below are the full nutrition facts of Chick-fil-A’s chicken sandwich no bun. 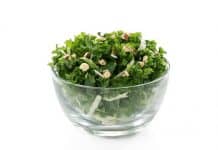 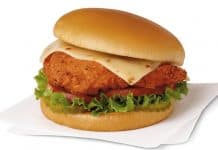