The Stuffed Crust Pizza returns to the menu for a limited time at participating Little Caesars locations.

Little Caesars ExtraMostBestest Stuffed Crust Pizza is a large round pizza with a ring of extra gooey mozzarella cheese baked into the crust then topped with a mozzarella and Muenster blend and pepperoni slices. One slice racks up 379 calories, meaning the whole pie contains 3,030 calories. But those flavors are worth it.

For those unfamiliar, ExtraMostBestest Pizzas offer 25 percent more cheese and 80 percent more pepperoni than regular pizzas. They’re the nation’s best price with the most cheese and toppings, according the Little Caesars website.

There used to be a Deep! Deep! Dish version, but it has not been on the menu since 2016. For comparison’s sake, the Deep Deep Dish Stuffed Crust Pizza had 420 calories, 20 grams of fat, and 41 grams of carbs per slice.

Calories breakdown: 46 percent of the calories come from fat, 34 percent from carbs, and 20 percent from protein.

You can check out the full nutritional info in the table below: 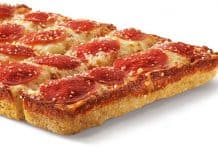